In his performances, paintings, drawings, and ceramics, Mikołaj Sobczak develops forms of political activism and negotiates questions concerning a new collective culture of identity and memory. With recourse to historical events, as well as fictional narratives such as fairytales, legends, and myths, he expands the narrative patterns of traditional, canonical, and even instrumentalized stories, to include moments of emancipation. In focus are primarily the marginalized figures of the LGBTQ* community who have been suppressed from historiography. In the figurative representations of the work Die Vögel (The Birds), a bird fountain fired in clay and arrayed with drawings, the protagonists are mobilized to build a new state under the guise of restoring their lost rights. They are all united by their direct relation to the world of birds. The initiators of the construction, however – “Skinheads” presented on the lower part of the fountain – appear to be more interested in the ghettoization of the birds than in their liberation. In his works’ visual narratives, various references’ narrative strands become intertwined. From Peter Bruegel’s renowned representation of the tragic fall of Icarus, to the satire of a political utopia portrayed by the Greek poet Aristophanes in his play The Birds, to Stanisław Lem’s depiction of the fear of the unknown in his novel Solaris.

Mikołaj Sobczak (*1989 in Poznan, PL) lives between Warsaw and Amsterdam. He studied at the Academy of Fine Arts Warsaw, with a scholarship at the Berlin University of the Arts and the Kunstakademie Münster. This year will follow an artist’s residency at the Rijksakademie van beeldende kunsten in Amsterdam. 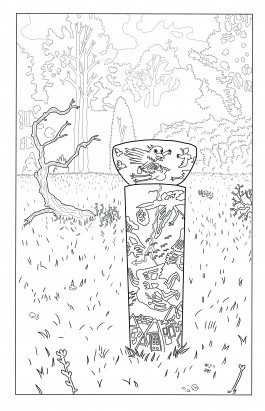