In her practice, the multidisciplinary artist Kinga Kiełczyńska reflects on the relationship between humanity and nature. The starting point for this observation is the artist’s ecological commitment. In her manifesto, entitled Reductionist Art Manifesto, she calls for the dominant logic of productive growth to be replaced with a logic of reduction, and not only in relation to the general economy of commodities, but also the production of art. Instead of thinking in terms of accumulation and “continually polluting physical and mental space,” Kiełczyńska suggests drawing from what is already there. Her perspective experiments with ideas beyond economic linearity and puts forwards new definitional models for productivity. Following her own demands, the artist uses materials found in the park for her work Hidden Interface. She builds an architectural structure out of twigs and branches, which is a far cry from economical and institutional classification. Kinga Kiełczyńska’s installation establishes itself playfully in the surroundings of the Lantz’scher Park and forms a tool for the artist’s demarcation of non-linear spaces of possibility. In relation to a sign, which reads “Land for Sale,” she humorously imagines a vending situation, with which she not least points to the economic assimilation of natural resources.

Kinga Kiełczyńskas (*1972 in Warsaw, PL) lives and works in Warsaw. She studied at the Gerrit Rietveld Academy and the Sandberg Institute in Amsterdam. 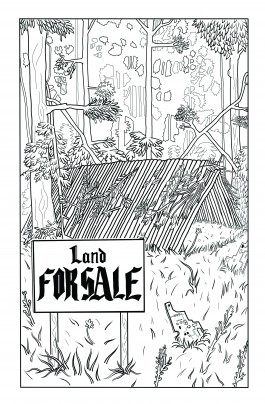