“The stone dam of time had broken and the past littered the streets like beached whales.”

José Montealegre’s The Sundial: Story Five (2021) is part of his ongoing series of texts titled The Sundial. The stories are set in Florence and describe everyday observations during forays through the city in the shared “we” perspective. During these expeditions, the main characters discover a sundial on the facade of a closed museum, hear about a pack of wolves in a neighboring village, and find the memoirs of the fictional figure Matilda Sterras, which chronicle a time machine. In the text work shown here, Florence is hit by a storm that floods the streets and brings chaos—based on the flooding of Florence in 1966.

Printed on a single page in book layout, the work gives the impression of a found loose novel page. Following the logic of the book, the sentence breaks off abruptly at the end of the page, prompting the reader to imagine the rest of the story themselves. In this way, time not only plays a role in Montealegre’s narrative style, which is inspired by Giovanni Bocaccio and Ursula K. Le Guin, but also in the way of presentation, through the consistent form—a single book page—of The Sundial series. The attempt to fit the segments of text into a linear narrative fails. Instead of a beginning and an end, The Sundial is characterized by repetition: the protagonists are located in a perpetual present.

Alongside this is Montealegre’s sculptural work Lazarus (Tunnel) (2021): a miniature greenhouse containing a skeletal hand, from which copper flower seedlings grow. Situated somewhere between a memento mori and a new beginning, it functions as a time portal that writes non-linear (his)stories.

José Montealegre (b. 1992,Tegucigalpa, HND) lives and works in Florence. Montealegre graduated from the Hochschule für Bildende Künste - Städelschule in 2019. 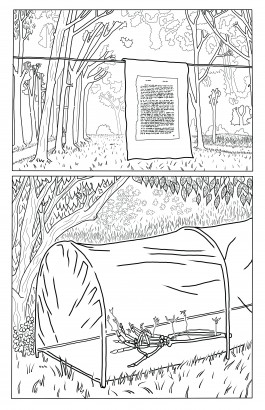