Paddock. Just hurried enough. Resting from the gale. Seams, Parture. We gathered together in the cracks just long enough to escape the gale, our hair blown back into a rotten mess, just long enough to whisper about what was next, about growing old and being wild. Match, unmatch, matched again and revealed in a paddock will be a being, undetermined and uncontrollable. Bejeweled with rock pinks, besotted with wet from the rains and fog.

The collaborative works of Jordan Loeppky-Kolesnik and Rindon Johnson are informed by an interest in speculative fiction, Land Art, traditional crafts, and architecture. They question the latter for its psychological and social implications as well as its potential for offering space for fictional narratives. In this way, the artists create architectures that set free wayward and emotional states, in order to negotiate them in the next step as socially constructed modes of being and acting. As the title implies with the word “paddock”, the form of the sculpture refers to a run, overlaid with sand, which is used for keeping animals, and especially horses, to give them freedom of movement in a controlled form. The contingency of the run, consisting of the simultaneous recognition and restriction of needs, speaks of forms of taming and domestication wildness, freedom, libidinal needs, and instincts. This narration becomes the starting point of a fragmentary story, which is set off by the title of the work, and which weaves itself in with the stonework’s various seedlings and perennials.

(*1990 in San Francisco, USA) lives and works in Berlin, where he is an Associate Fellow at the University of the Arts Berlin. 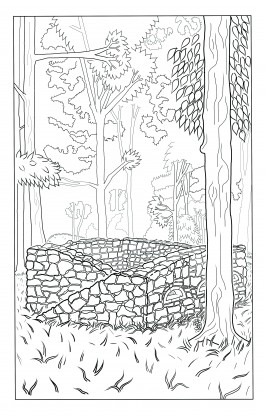