you will die even

if the god of death is your uncle

In her three-part performance SSSSUUUU - GUUUUNG – GGGGAAAA, Mira Mann engages Korean performative traditions. The artist highlights these traditions’ capacity to produce decolonial histories, beyond Eurocentric perspectives. The starting point for the performance is one of the five orally transmitted, Korean Pansori narratives, with the title Sugungga (En: The Song of the Underwater Palace). Pansori is a Korean genre of epic and musical narration that emerged alongside the ceremonies and narrative song of the Mudang shamans in the seventeenth century, and which was interpreted by the Kiseang (Korean courtesans, entertainers, and sex workers of the Joseon Dynasty and its successors), among others. Mira Mann’s is interested in both Pansori’s hybrid narrative forms as well as its diverse interpretants, who are seldom mentioned in official, Korean historiography. Reconnecting with their narratives and modes of being, the performers adapt the piece freely to tell individual stories of subversive border crossers who aim to destabilize cultural hegemonies, racist misattributions, the privileging of heteronormativity, and binary gender ascriptions. Furthermore, they plot connections to sources of knowledge about lost relations of humans to nature. 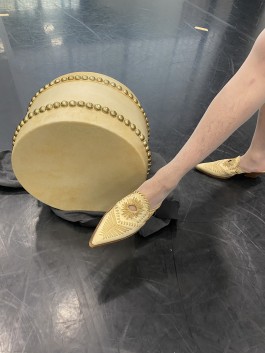