Meeting point on the Lindenhügel

DECHA is multidisciplinary artist and musician Viktoria Wehrmeister’s musical solo project. In her compositions, experimental lo-fi sounds converge with poetic texts in polyphonic sound arrangements, in which she embeds both Spanish texts and stories in her own invented, fictive language. Her songs’ tender, stark, questioning and determined sounds, melodies, and voices reflect on the actions and positions that one adopts for oneself with them. DECHA produces hybrid soundscapes that pass into listeners’ ears like an assortment of softly whispering, wildly blooming offerings. After her successful first solo release Hielo Boca, DECHA will present her new album la vida te busca in the Lantz’scher Park. In addition, she will develop a site-specific configuration, in which she will incorporate into a temporary setting the table on Lindenhügel as well as the empty pedestals on the large meadow.

Viktoria Wehrmeister (*1968 in Mexico-City, MEX) lives and works in Düsseldorf. She studied at the Kunstakademie Düsseldorf and at UCLA, Los Angeles. 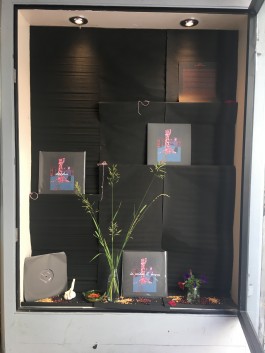