Afternoon of a Faun

Meeting point on the large meadow

Cassie Augusta Jørgensen works at the intersections of visual art, dance, and theater. The artist, dancer, and choreographer intermingles both elements from club- and sub-culture, as well as from the cultural canon of so-called “High Art,” or “High Culture.” The performance Afternoon of a Faune, which will take place in the park, pays close attention to the connection between dance, body, and language. It is a free re-telling of the ballet The Afternoon of a Faun, which is based on a poem by Stéphane Mallarmé set to music by Claude Debussy, and premiered by Vaslav Nijinksky in Paris in 1912. In a duet with the dancer and choreographer Shade Théret, Jørgensen examines the figure of the faun with reference to the contemporary representation of gender identity that is connected with this. As a mythological being, half-human and half-goat, the form of the faun refers to both an imposed polarization and a transitory process, thus giving rise to a reflection on the potentials, but above all the problematics, of liberalizing narratives.

Cassie Augusta Jørgensen (*1991 in Copenhagen, DK) lives and works in Berlin and Copenhagen. Alongside classical ballet and modern dance training, she studied visual arts at the Royal Danish Art Academy in Copenhagen and dance and choreography at the Alvin Ailey School in New York. 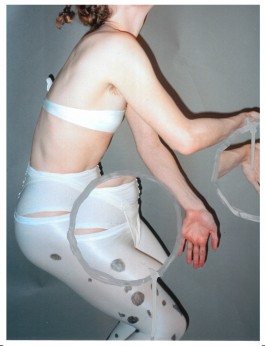