The works of the artist duo Daniel Dewar and Grégory Gicquel may seem like anachronisms in this era of the ascent of digital technology: the two have spent years experimenting with a wide range of materials and techniques that they first had to teach themselves and for which they sometimes even needed to make their own equipment such as weaving frames or wood-fired furnaces. Both emphasize the importance of executing their works with their own means, using traditional and modern tools and reviving production processes rooted in various crafts that are being superseded by technical automation. They break with tradition by combining their media with incongruous motifs: the entrails, animal parts, or human limbs, for example, that seem to grow from massive oaken chests and cabinets make for a sight that is as amusing as it is disconcerting. Humans, animals, and plants coalesce into a bizarre and sensual new creation in works that exude the conviction that the same lifeblood courses through all beings and manifests itself even in the cut and dressed wood or marble block. Displacing forms out of their original contexts and assembling them in fanciful hybrids, Dewar & Gicquel produce absurd objects—glimpses, like chimeras or the creatures of legend, of an alternate reality. The Nudes exhibited in the park visualize a dialogue between a shell, a pair of legs, a faucet, intestinal system as well as bidet.

(b. 1975 in St. Brieuc, FR) lives and works in Plevenon, France. The artist duo has been working together since they studied together at the Rennes School of Art in 1989. 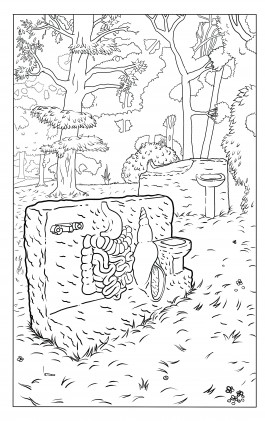